Believe it or not, the story of Daniel in the Lion’s Den is one of the many proofs that the Bible is the inspired word of God. Why? Because as we shall see, it is a story that foreshadowed the process by which the Lord Jesus Christ would also be condemned and finally, put to death and then rise again. If you’ve seen our article on Abraham and Isaac – A Pattern of Things to Come – then you’ll understand that what we’re about to consider is along the same lines.

After Jesus’ resurrection, two of his disciples were walking on a journey to a town called Emmaus. Jesus joined them but they did not, could not, perceive that it was him. The discussion came around to recent events in Jerusalem and this “stranger” chided them for being so slow to believe all that the prophets had written. “And beginning at Moses and all the Prophets, He expounded to them in all the Scriptures the things concerning Himself (Luke 24:27). The story of Daniel in the lion’s den could well have been one of those passages that he referred to.

When Daniel was a young man, newly deported to Babylon among the captives of Judah, he “purposed in his heart” (1:8) that he would remain faithful to his God. As an old man, ready to die, the angel Gabriel said to him “from the first day that you set your heart to understand and humble yourself before your God, your words were heard” (10:12). Daniel was a man who in his youth, made a resolution which he never served from – and as a consequence, was a man “greatly beloved”. This man, in whom was “an excellent spirit” and in whom they could find no fault, is set forth in this story as a man who represents the sinless Son of God.

Daniel had a keen interest in understanding and knowing the meaning of, the prophecies he had been given. To such a man, God gave the privilege of being set forth in the Old Testament scriptures as a type, a pattern of the death and resurrection of Jesus Christ.

The chapter is set in the reign of Darius, king of Persia, with Daniel being one of three governors, to whom the satraps gave account. Like Jesus Christ, he is presented before us as one who has been entrusted with the king’s business and is faithful in all things – so much so, that the king thought to “set him over the whole realm” as indeed, God will do with his Son one day.

VERSE 4
But in response to his outstanding character, the other presidents and princes envied Daniel and “sought to find occasion” against him. These envious rulers wanted something to accuse Daniel of, but couldn’t find any charge or fault, because “he was faithful”. So they plotted together and came up with another plan.

Does that sound familiar? Even Pontius Pilate observed concerning Jesus, that it was “for envy, they had delivered him” (Matt. 27:18). Christ’s outstanding qualities which inspired the people while at the same time, exposed their own hypocrisy, led the Jewish rulers to plot against him also. Though they tried to trap Jesus, they could not withstand his wisdom and integrity. On one occasion he said to them “Which of you convinces me of sin?” Our Lord was not negligent to fulfill all his duty, nor was he ever tempted to compromise what he knew to be right, for personal advantage.

What can we receive from this? We could ask ourselves whether, like Daniel, we would maintain the same level of integrity if we were given great authority in this world? All those who are Christ’s have been promised such authority in the kingdom of God – but he will only give it to those who have proved themselves worthy of it by living this life with honesty and integrity.

So they assembled themselves before the king with a proposition – “All the presidents of the kingdom, the governors, and the princes, the counselors, and the captains, have consulted together”. This was not actually true, for had Daniel, who was one of them, been consulted, he would never have agreed to it. It was more a conspiracy than a collaboration!

Many years later, when the apostle Peter was recounting the treachery of the Jewish and Roman rulers against Jesus, he quoted from the words of Psalm 2 – “the kings of the earth … took counsel together against the Lord” (Acts 4:26).

But let’s look at the proposition presented to Darius – “whoever petitions any god or man for thirty days, except you, O king, shall be cast into the den of lions.” Their appeal was to the perceived divinity of the Persian emperor.

It’s interesting that the charge that finally landed the sentence of death for Jesus, was the accusation that by admitting that he was a king, he had spoken against Caesar. In their hypocrisy, the religious leadership cried out “we have no king but Caesar” and “if you do not condemn this man, you are not Caesar’s friend”. Like Darius of old, Pontius Pilate found himself in an impossible position – one which led to the condemnation of a righteous man.

As an additional note, we should not forget that Caesar was revered as one of the Roman gods – and the issue in Daniel’s time was loyalty to God to the point where the decree that “no petition could be asked of any god or man except the king” had to be disregarded. 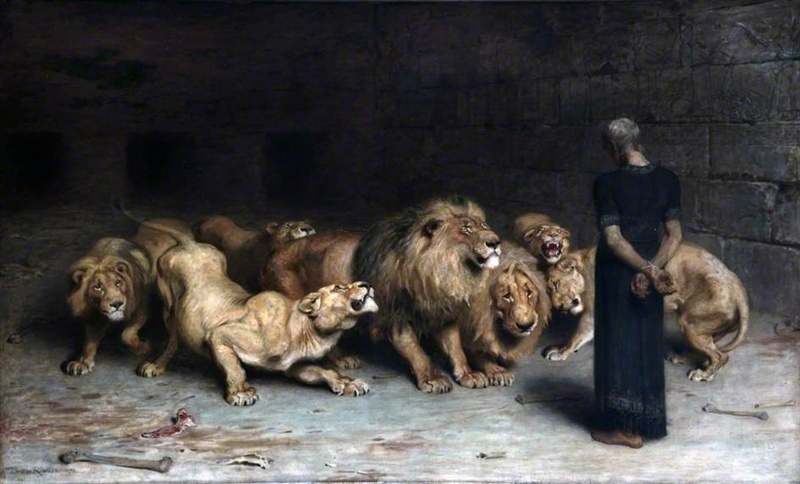 Darius, possibly flattered by the apparently unanimous offer and perhaps considering it politically expedient, accepted their proposal. Now one of the noted characteristics of Persian royal decrees was “that it be not changed, according to the law of the Medes and Persians”. Although this was in its time designed to emphasize the divinity of the king, it’s also applicable as far as the destiny of the Son of God was concerned.

Even though Jesus pleaded in agony that “if it were possible, this cup may pass from me” – for the sake of humanity it could not be so. It had been established by the “determinate counsel and foreknowledge of God” that Jesus should die. It was like the law of the Medes and Persians – it could not be changed.

VERSE 10
In this verse, we have Daniel’s response to the decree. He “went to his house” and prayed. Like Jesus in the garden of Gethsemane, they knew where to find him thanks to Judas, because he “often resorted there”. We can imagine Daniel praying for strength & deliverance under the circumstances. There is even an echo in the terms used to describe Daniel’s actions – he kneeled “three times a day and prayed”. At the time they found the Lord Jesus, he had just finished praying three times.

Of course, they were waiting for him, knowing his devotion to his God. So they quickly hurried off to the king that they might accuse him.

VERSE 13
The terms of their accusation are interesting. They referred to Daniel as one “which is of the children of the captivity of Judah” who “regards not you, nor the decree”. This was a demeaning title, emphasizing Daniel’s “questionable” origins. So also with Jesus – his accusers told Pilate “beginning at (despised) Nazareth, he “stirs up the people and forbids to give tribute to Caesar, saying that he himself is Christ, a king”.

But look at what happened next!

VERSE 14
Darius knew why they had done this. He was very upset with himself for allowing himself to be tricked this way. Consequently, the king “set his heart on Daniel to deliver him”. Does that remind you of anything connected with the trial of Jesus? We are told that Pilate also knew that for envy they had delivered him, & tried to set him free. He sent him to Herod, protested his innocence three times, and finally washed his hands of the matter before them all.

VERSE 15
The evil princes had the king where they wanted him. They reminded him that “it is the law of the Medes and Persians that no decree or statute which the king establishes may be changed.” Darius was trapped by his own laws. So also was Pontius Pilate. “If you let this man go, you are not Caesar’s friend”, they said.

So the unhappy king capitulated and Daniel was condemned to death.

The record very simply tells us that “they brought Daniel and cast him into the den of lions” (v15). This was to be Daniel’s grave, or sepulcher. They intended that he should be torn apart by wild beasts, so reminiscent of the words of Psalm 22:12-21 …

Here now, in point form, are the things that we’re told happened to Daniel, which found a future echo in what happened to Jesus of Nazareth. 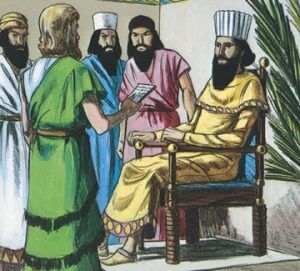 “the purpose might not be changed” –
• So no-one could secretly free him
• The Jews didn’t want someone to steal the body & report Jesus alive. (Matt. 27:64)

VERSE 22
Daniel was still alive and cried to the king “My God sent His angel and shut the lions’ mouths” –
• An angel descended from heaven to deliver Christ from the tomb. (Matt. 28:3)

“because I was found innocent before Him” –
• So the grave could not hold the sinless Lord.

So, like the resurrected Jesus, Daniel was brought up out of the pit and “no injury whatever was found on him because he believed in his God” –
• Daniel’s faith & trust in God saved him.
• Of Christ it was said: “he trusted in the LORD that he would deliver him. Let him deliver him …”

But this prophetical story is not finished yet. Once Daniel was safe, “the king gave the command, and they brought those men who had accused Daniel, and they cast them into the den of lions—them, their children, and their wives; and the lions overpowered them.” Thus, they suffered the same fate which they had prepared for Daniel.

• So the Jews who crucified Christ were later destroyed with their families, many of them crucified.
• “weep not for me; weep for yourselves and your children,” said Jesus to the women following him to his crucifixion. He knew what was coming on Judea. “These will be the days of vengeance,” he told his disciples on the Mount of Olives.

To complete the pattern, following Daniel’s return from certain death, we read:

“King Darius wrote: To all peoples, nations, and languages that dwell in all the earth: Peace be multiplied to you.
I make a decree that in every dominion of my kingdom men must tremble and fear before the God of Daniel. For He is the living God, And steadfast forever; His kingdom is the one which shall not be destroyed, And His dominion shall endure to the end. He delivers and rescues, And He works signs and wonders In heaven and on earth, Who has delivered Daniel from the power of the lions.”

So the “gospel” now goes forth into all the world, announcing that all should acknowledge the only true and living God.

So there we have it. The story of Daniel in the Lion’s Den is not just another Bible story to entertain children. It is filled with prophetic depth and is yet another testimony, that hundreds of years before, the story of Jesus’ trial, condemnation, death and resurrection, followed by the gospel going forth into the whole world – had all been planned by “the Most High who rules in the kingdom of men and gives it to whomsoever He wills”. 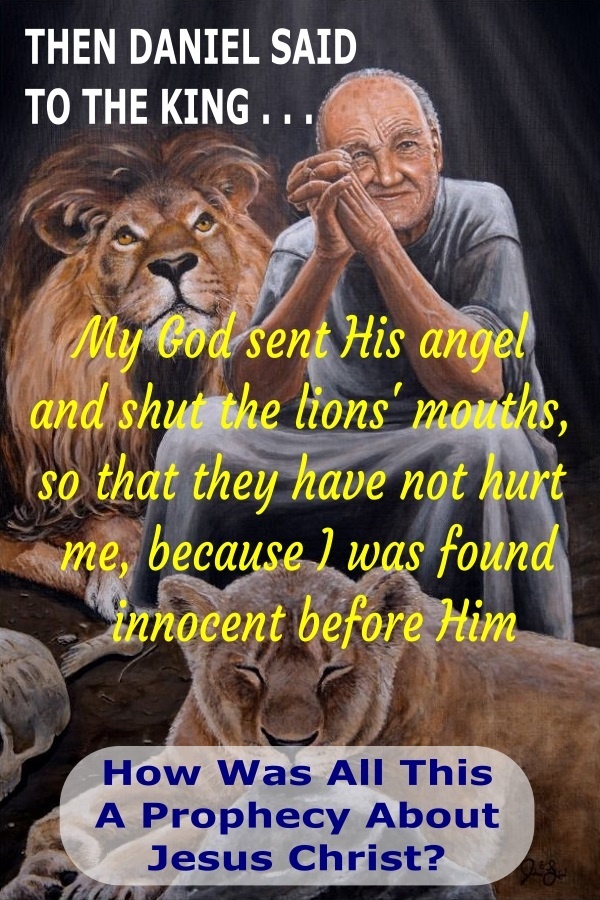 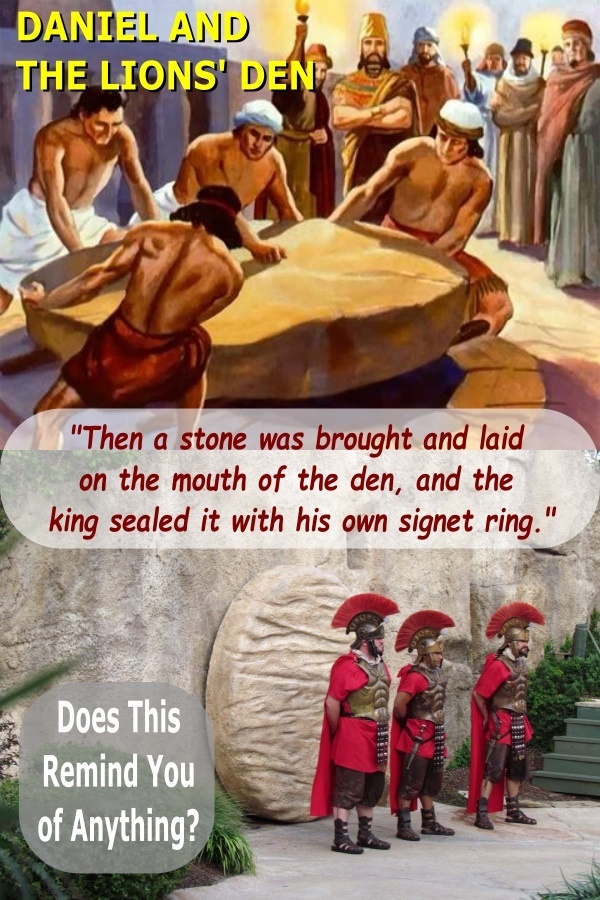