If ever there was an example of how one woman’s influence can make or break a man then Jezebel in the Bible would have to be it. She was originally a Sidonian princess who married King Ahab of Israel and became the infamous nemesis of Elijah the prophet.

Jezebel was one of those strong personalities that we all come across from time to time. Ruthless and determined, she used her position as queen to enforce Baal worship in Israel to an extent that Israel had never seen before, until her time. Baal worship was all about fertility – and this included an emphasis on sexual promiscuity, which was now elevated to the status of religious rites. So the summary of the achievements of Jezebel in the Bible is given to us in the Book of Revelation:

“You tolerate that woman Jezebel, who calls herself a prophet. By her teaching she misleads my servants into sexual immorality and the eating of food sacrificed to idols” (Rev. 2:20).

The paradox about Jezebel in the Bible was, that she was fiercely religious. The thing about her religion though, was that it was more about a set of cultural values than it was about devotion and meaningful relationship. The main problem that Yahweh, God of Israel, had with idolatrous worship, was that apart from it being empty and without substance, it also came with a way of life and mindset that glorified evil. Jezebel brought with her, all the values and perceptions of her Phoenician heritage and systematically set about to make Israel “another Phoenicia”.

We are also told in 2 Kings 9:22 that Jezebel in the Bible was into “witchcraft” and the arts of sorcery. These arts were based on communication with the alleged spirits of the dead and the powers they possessed to affect the living.

Jezebel’s name means “chaste” and yet she glorified promiscuity. It was like a mixed message which created confusion or a sense of hypocrisy.

Jezebel’s character is clearly demonstrated in her reaction to the news of Elijah’s triumph over the prophets of Baal in 1 Kings 18. When fire had fallen from heaven in the sight of all and licked up the water-filled trenches and consumed the sacrificial animal, all the people cried out “Yahweh, He is God! Yahweh, He is God!”. The evidence was undeniable and no-one could wonder whether their senses had deceived them because everyone saw it! But as soon as the news of the demise of Baal’s prophets came to Jezebel, she sent a message to Elijah with these words:

“May the gods deal with me, be it ever so severely, if by this time tomorrow I do not make your life like that of one of them”. (1 Kings 19:2)

Jezebel’s single-minded and ruthless determination even got the better of Elijah. Strong and narcisisstic people can be like that. She was not interested in “truth” or “evidence”. She had one objective – to preserve and advance the form of worship and way of life that she had grown up with. Not only so, but her very reputation and status as “prophetess” and representative of Baal now depended on it. Elijah on the other hand, was a man of passion and feeling and the intimidation affected him, so that he fled for his life and became very despondent.

What Jezebel in the Bible Stands For

If we were to summarize the above observations, we would say that Jezebel represents a certain type of person. This kind of person has no regard for qualities such as truth, honour and faithfulness. Evidence that contradicts what they believe does not interest them. Their only concern is their reputation and the preservation of the way of life that they have enjoyed.

For some people, this could be a religious way of life, for others it could be purely secular. But whatever it is, they are very single-minded and ruthless about it. If they have to resort to intimidation and threats, they don’t care because they have no regard for human feelings or sensitivities. They cannot feel the pain that they inflict upon others because in a sense, they have no heart. They are happy to mess with your head, appearing to stand for one thing while doing another.

The next significant story in the career of Jezebel is the issue over the vineyard of Naboth the Jezreelite. Ahab wanted it for a “garden of herbs” and made Naboth an offer. But Naboth refused to sell it to him on what we could call “biblical grounds” because they were based on the principles of family inheritance in the Law of Moses. Now although it made him unhappy, Ahab respected Naboth’s reasons, but being the kind of man he was, chose to sulk about it.

When Jezebel observed this, she asked Ahab why he was not eating. His response is interesting because he omitted to tell her about Naboth’s reasons for not selling because he knew that she would have no respect for them. Jezebel’s response is telling. “Is this how you act as king over Israel? Get up and eat! Cheer up. I’ll get you the vineyard of Naboth the Jezreelite.”

The methods she employed speak volumes about Jezebel’s character. She set Naboth up and used other people to do it. So they proclaimed a special assembly and placed Naboth in a prominent place where he could be publicly accused and then arranged two scoundrels to bring charges of treason and hypocrisy against him. She even made sure that the proceedings appeared in harmony with the requirements of the Law of Moses, which specified that charges could only be established “at the mouth of two or three witnesses” but not one witness. 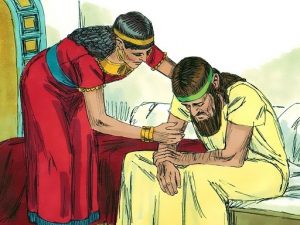 The ironic thing is, that this very requirement for a minimum “two or three witnesses” was actually a provision for mercy against the death penalty. Why? Because these witnesses had to also be willing to be the first ones to carry out the death sentence – and if their testimony was found to be false, they would suffer the same fate as the accused.

So Naboth was stoned to death and Jezebel took his vineyard in Ahab’s name. This was the last straw for Yahweh. He sent Elijah the prophet to meet Ahab in the vineyard of Naboth and tell him

“This is what the LORD says: Have you not murdered a man and seized his property? In the place where dogs licked up Naboth’s blood, dogs will lick up your blood – yes, yours! Because you have sold yourself to do evil in the eyes of the LORD, He says, ‘I am going to bring disaster on you. I will wipe out your descendants and cut off from Ahab every last male in Israel, slave or free.’

And also concerning Jezebel the LORD says: ‘Dogs will devour Jezebel by the wall of Jezreel.'”

And so it eventually happened exactly as God predicted it would. Ahab was wounded in battle and later died from loss of blood. When they washed his chariot, dogs came and licked up the blood. Jezebel’s end was a little more dramatic.

Jezebel Dies With Her Makeup On 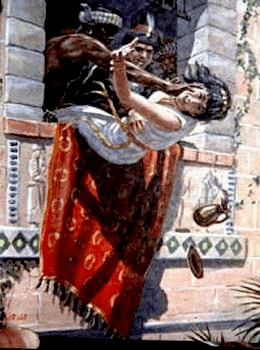 A lot has been made of Jezebel “painting her face” before her inglorious death, as an indication of God’s opinion on makeup. But personally, I think the connection is a little overdone. The question we need to ask is “why did Jezebel paint her face” under the circumstances? What was her motive? This is what’s really important and not just the fact that she did so.

It was the time of Jehu, who was zealously eliminating all the posterity of Ahab in order to solidify his own power base. As he rode into Jezreel, Jezebel put on her makeup, arranged her hair and looked out of a window at him. Why did she do this? Because she knew that death was coming and was determined that she would not be humiliated but would die as a queen!

So Jezebel stood defiantly at the window and used her last moments to accuse Jehu of treason. “Did Zimri have peace who slew his master?” she cried. Jehu was not going to negotiate with her and called out for any who supported him and a few eunuchs appeared. “Throw her down” he commanded – and they did so.

So Jezebel in the Bible died looking like a queen, but Yahweh had decreed that her final end would not be so glorious. Jehu rode his chariot over her and went into the city. Later, he told some of his attendants to go and bury her because she was royalty after all. But when they came to the place where she had lain, the dogs had eaten her. All that they left were her hands, her head and her feet. Even the dogs would not eat “the hands that shed innocent blood and the feet that ran swiftly to evil”.