The Book of Esther is well known among the Jewish people. In fact, it is read by them every year during the Feast of Purim and has become to them a story of national pride. But it is also a wonderful story of courage and faith. The Book of Esther is also rich in types and patterns which expound for us, the purpose of God in redeeming mankind from the power of sin.

The story of Esther, Mordecai, Haman and King Ahasuerus, is a drama which exhibits the Divine supervision of the people of Israel. It demonstrates the sayings of the prophets that “no weapon that is formed against thee shall prosper” and “surely there is no enchantment against Jacob”.

Not only so, but it is carefully and deliberately written in such a way that into the story is woven the principles of the atonement – how God would save His people from their sins. As we shall see, it is also the basis upon which Israel will be saved.

The Book of Esther

Background and Outline of the Book

If we were to pick a passage from the book which could serve as a summary of the whole story, it would be from chapter 9:24-25. 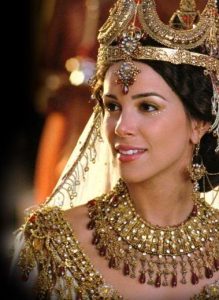 “Because Haman, the son of Hammedatha the Agagite, the enemy of all the Jews, had plotted against the Jews to annihilate them, and had cast Pur (that is, the lot), to consume them and destroy them; but when Esther came before the king, he commanded by letter that this wicked plot which Haman had devised against the Jews should return on his own head, and that he and his sons should be hanged on the gallows.”

The events which are told in this wonderful story are, like most biblical stories, actually “types” or patterns of things to come – things which are soon to climax in the return of Israel’s Messiah, who will save them from “the time of Jacob’s trouble”. The power of sin in political and military manifestation (Gog and Magog of Ezekiel 38) will be destroyed, just as it was in one man 2,000 years ago, by faith.

The story demonstrates how the God of Israel is in complete control, even though His name is never mentioned in the book. He has supervised the affairs of Israel in the past and is no less interested in them today.

Historical Background to the Book of Esther 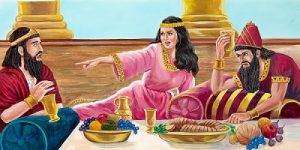 The Adversary and Enemy is this Wicked Haman!

The times of Esther and Mordecai were one of great activity in the Divine Purpose. The 70 years of Babylonian supremacy had come to an end with the overthrow of the city by Cyrus the Persian. In fulfulment of the words of Daniel the prophet, there would be a “going forth of the word to return and build Jerusalem” and accordingly, 42,000 Jews had returned to the land under the supervision of Joshua the High Priest and Zerubbabel the governor. They had laid the foundation of the new temple and celebrated the Feast of Tabernacles.

Meanwhile, back in Babylon, Daniel had seen the last of his visions – recorded in chapters 10-12. The Jews who had recently re-settled in the land were receiving opposition from the local residents (not much has changed!) who caused enough trouble so that the work on the temple was forced to cease until the second year of Darius, king of Persia.

There has been some divergence of opinion as to who the “Ahasuerus” of the Book of Esther actually was. Some say it was Xerxes, while others, Darius Hystaspes. I favor Darius. The word “Ahasuerus” is actually a title more than a name. It means “the mighty one” and was in line with the way the Persian kings liked to present themselves to the people as incarnations of the gods.

But the interesting thing is this; the very phenomenon of the god-kings of Persia becomes a catalyst for presenting the great “Ahasuerus” in the story of Esther, as a type of God Himself. As the story unfolds, we shall see some marvelous patterns in which the secret of God’s ultimate purpose with Israel, its enemies, Jesus Christ and his bride and the plan of salvation, were to unfold.

The Story Behind the Story

So you think that the Book of Esther in the Bible, is a story about a king of Persia, who elevated a vain and wicked man named Haman to great power – and how this Haman despised Mordecai the Jew because he would not bow down to him? Is is just a story about how Haman’s evil plan to not only kill Mordecai, but all his Jewish compatriots, was thwarted by the courage of a beautiful queen?

The story that unfolds in the book of Esther is actually a parable about something far greater. Here are what the players really represent:

There is a lot more in support of the above synopsis, as the detail of the story in the Book of Esther unfolds. It is a worthwhile exercise to explore this avenue, as it will open up a new way of looking at the story and give it more meaning.