In Daniel 11:40 we read of “the king of the North and the King of the South” engaging in battle at “the time of the end.” While the setting of this prophecy is quite clear (the time of the end), understanding who the kings represent is more complicated. To understand who these kings are, we need to consider the context of the extensive prophecy found in Daniel 11.

The setting for Daniel 11 — the chapter containing the most detailed prophecy in the Bible—is found in the preceding chapter. Here we are told that Daniel was given the message in the “third year of Cyrus king of Persia” (Daniel 10:1). The Expositor’s Bible Commentary identifies the third year of Cyrus as 537 or 536 B.C., meaning this prophecy was given to Daniel more than 500 years before Christ’s coming to earth the first time. The events prophesied began shortly after Daniel received the vision and will continue through the end time prior to the return of Christ.

Also consider the words of the angel who came to help Daniel understand the vision. This messenger from God told Daniel, “Now I have come to make you understand what will happen to your people in the latter days, for the vision refers to many days yet to come” (Daniel 10:14, emphasis added throughout).

Not only was the prophecy going to occur quite some time in the future from when Daniel received it, it was also primarily focused on what would happen to the Jewish people — Daniel’s people.

The Kings of Daniel 11

The first four verses of this chapter deal with events of the Persian and Greek empires. These passages contain amazing historical details that confirm the validity of the Bible. Verse 4 is a prophecy of the division of Alexander the Great’s kingdom into four regions following his death. Then in verses 5-6, for the first time in the Book of Daniel, we read about “the king of the North” and “the king of the South.” 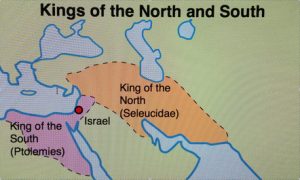 Since the focus of this prophecy in Daniel 11 is what would happen to the Jewish people (Daniel 10:14), the directions of south and north in this chapter must be understood in relation to Jerusalem. While the details mentioned in Daniel 11 can be hard to follow, a careful comparison of the prophecy with history makes the meaning clear. A Bible help such as The Expositor’s Bible Commentary can be quite useful in sorting out the historical record that fulfilled the predictions.

The prophecy in Daniel 11:5-31 then documents the historical interactions between the king of the North and the king of the South. Next, this prophecy seems to include the story of the Maccabees, a Jewish family that led the resistance against Antiochus and his successors because of their efforts to force the Jewish people to accept pagan Greek practices (verses 32-39).

Verses 35-39 seem to describe some actions by Antiochus during the time of the Maccabees, and they also serve as a forerunner of actions that will be taken by the beast power that will exist just before Jesus Christ’s return to earth.

In 65 B.C. the Roman Empire defeated Seleucid Syria and in 30 B.C. it also defeated Egypt. So both “the king of the North and the king of South” now came under Roman rule. It is also interesting to note that the detailed early part of the prophecy seems to end before the first century and not resume until “the time of the end” referred to in Daniel 11:40.

Why is there a gap of approximately 2,000 years between these verses? It is because there was no Jewish nation in the Middle East during this time.

With this background, we are now ready to examine Daniel 11:40 and the verses that follow.

“At the time of the end the king of the South shall attack him; and the king of the North shall come against him like a whirlwind, with chariots, horsemen, and with many ships; and he shall enter the countries, overwhelm them, and pass through. He shall also enter the Glorious Land, and many countries shall be overthrown; but these shall escape from his hand: Edom, Moab, and the prominent people of Ammon” (Daniel 11:40-41). 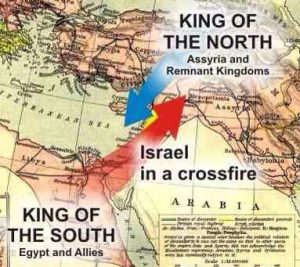 This passage tells us that the “king of the North,” which will likely be a revival of the the fourth kingdom spoken of in Daniel 2 and 7 as well as in Revelation 17, will successfully counterattack the “king of the South.” Verses 41-43 indicate that, in the process, he will enter the “Glorious Land” (the Holy Land) and that he will gain control over or “have power over the treasures of gold and silver, and over all the precious things of Egypt.”

As for the identity of “the king of the South,” the reign of the Ptolemaic rulers from Egypt came to an end long ago. But a principle remains – the Ptolemies were a foreign (Greek) power in occupation of Egypt. So it appears that Egypt will once again either be “the king of the South” or be aligned with other nations representing this power that will exist at the time of the end before Christ’s return (verse 43).

The center of conflict

Regardless of the reason or reasons why the “king of the South” and the “king of the North” fight, prophecies in the book of Zechariah explain that Jerusalem will be a focal point of conflict before Jesus Christ’s return. As God said through His prophet, “Behold, I will make Jerusalem a cup of drunkenness to all the surrounding peoples, when they lay siege against Judah and Jerusalem. And it shall happen in that day that I will make Jerusalem a very heavy stone for all peoples; all who would heave it away will surely be cut in pieces, though all nations of the earth are gathered against it” (Zechariah 12:2-3).

The phrase “a cup of drunkenness” seems to refer to the confusion—perhaps because of angry emotions or because of the complexity of the issue—that the intervening nations will be in regarding how to solve the conflict. As for Jerusalem being “a very heavy stone for all peoples,” this historic city is destined to be a trouble spot affecting people far beyond its borders.

Those who try to “heave” the stone away—solve the “Jewish problem”—will pay a heavy price for doing so.

While contention over Jerusalem may or may not be the catalyst for the initial conflict between the “king of the South” and “the king of the North” at the time of the end, God shows through the prophet Zechariah that eventually all nations are going to be drawn into a conflict centered in Jerusalem. God says, “Behold, the day of the LORD is coming. … For I will gather all the nations to battle against Jerusalem” (Zechariah 14:1-2).

Continuing, the prophecy says, “Then the LORD will go forth and fight against those nations” (verse 3). After Jesus Christ decisively wins this battle and eliminates all opposition, He will establish the Kingdom of God here on earth.