Home » BIBLE PRINCIPLES » The Meaning of Grace – A Brief Review

So what is the true meaning of grace in the Bible? When we hear the word grace used today, it is common to hear it preceded by ‘unmerited’ or ‘undeserved’, as in ‘unmerited grace’, as if the word or idea needs some form of qualification or definition. As grace is an important word we should ask if this qualifier is correct and in accord with the teachings of Scripture, particularly New Testament teaching on how God saves.

Like many Bible words, grace carries with it a certain weight of theological history and interpretation. A review of Bible dictionaries will show this. Depending upon denomination, the word may have special meanings to certain groups, such as ‘general grace’ and ‘prevenient grace’.

The greek word for Grace is ‘karis’ and is used about 150 times in the New Testament. Because it is so topical, it is worth noting an associated Greek word ‘karisma’, which means a gift of grace or favor. This has given rise to the modern word ‘Charismatic’, adopted by those who believe they have been touched by the Holy Spirit or endowed with gifts of the Spirit.

The meaning of grace ‘karis’ is principally defined by usage. It has a variety of meanings, just like our English word grace. In the New Testament it is used both objectively and subjectively. Used objectively, it describes behavior that occasions pleasure, delight, favorable regard, charm or agreeableness. Used subjectively, it refers to an inclination towards favor, kindness, liberality and thanks, both in giving and receiving. It is in the objective sense that the word has significance for this brief review. We suggest that in this sense the word ‘favor’ provides a fair English definition.

One of the first times the word is used in the New Testament is Luke 2:52, “And Jesus increased in wisdom and stature, and in favor with God and man”. The word favor is the Greek ‘karis’. In this context does karis mean unmerited or undeserved favor? Such a qualifier is not justified, and works against what the verse intends to explain. As Jesus grew, his qualities excelled and as a consequence he was well regarded by God and man. In this situation and context the favor was merited.

Saved by Grace through Faith

We read in Ephesians 2:8-9 “For by grace are ye saved through faith: and that not of yourselves: it is the gift of God: Not of works, lest any man should boast”. The verse in not meant to be cut in pieces, as if the phrase ‘For by grace are ye saved’ stands alone. The whole verse tells us that it is by God’s favor that we are saved by faith. That is, by our faith in God and all his ways. God accepts our faith as the basis upon which we have fellowship with him and find salvation. This is God’s way of saving us and it is of his doing. It is his gift to us, not something we earn by works, ritual observance or law. 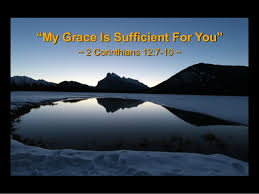 It is by God’s favor that we are saved by faith in him, his promises, his way, and his word. This is the true meaning of grace. God requires our faith so that he can work in our lives, fashioning us according to the image of his son. This is the work and way of God. But let’s explore this further. The idea is not foreign to us; we will readily recall Paul’s words in Romans. God condescends to show favor to us in accepting our faith.

Paul introduces the word ‘karis’ in Rom.3:24 “Being justified freely by his grace through the redemption that is in Christ Jesus…” and goes on to show that for us it is “through faith in his blood” (ie in what is declared and achieved in Christ’s death) that we receive forgiveness and justification. Here we see God’s favor displayed in justifying us, and again it is because of our faith.

Paul uses the word grace again in Romans 4, a chapter that is about what Abraham, our father, has found. Rom.4:2-4 “For if Abraham were justified by works, he hath whereof to glory; but not before God. For what saith the scripture? Abraham believed God, and it was counted unto him for righteousness. Now to him that works is the reward not reckoned of grace, but of debt”. Abraham is called the father of the faithful, and what he found becomes the basis and principle upon which all others can also find acceptance with God (v5, 16, 23, 24). So what exactly did Abraham find?

Abraham found that God recognized his belief (faith) in the promises, and counted his faith to him as righteousness. This acceptance was not a result of ritual observance or of works, as that would have put God in debt to Abraham, but a result of God’s favor. Again, it was God’s will to extend favor on the basis of (a man’s) faith.

Rom.5:1-2 “Therefore being justified by faith, we have peace with God through our Lord Jesus Christ: By whom we have access by faith into this grace wherein we stand, and rejoice in the hope of the glory of God”. Believing God, having faith in God’s promises and his ways, is of fundamental importance. In this reference Paul says that faith gives access into our current position of favor with God. Again we see our faith working in concert with God’s grace.

Our opening comments about the meaning of grace questioned the use of qualifying terms such as unmerited or undeserved when speaking of the grace of God. Unfortunately, these definitions are steeped in church theology. We do not recommend them as they cloud our understanding of how God saves.

The concepts found in the scriptural word grace or favor (karis) are both simple and yet profound; and they ought to continually remind us how we, as Abraham, can find favor and acceptance with God on the basis of our faith in him and all his ways. God works in our lives when we have faith in him (Eph.2:10). God offers this favor to all (Jew & Gentile) on the basis of belief in the gospel of the grace of God (Acts.20:24).